Upon suffering general malaise due to lack of vitamins I admit, I had a nacho break. Wednesday’s Horrid Nacho Experience at Subway caused a loss of faith.

Thankfully nachoist, comedian and general man of culture Tom Neenan (one half of the brilliant Gentlemen of Leisure) tweeted The Nacho Times these charming chos (that cost a fiver) 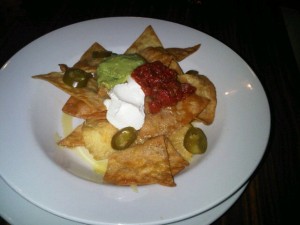 In terms of Baldness, they’ve avoided the problem with canny use of cheese– spreading it lightly over the dish as opposed to allowing it to congeal in the centre. Not quite enough, but admirable coverage. The whole thing is quite small though. Like a pygmy. Or, if I were to be less racist,  a starter.

The proportions in relation to the size and amount of chos are, as with pygmies, bang on with the homemade tortilla action rounding off the experience nicely. These chos probably have a converted townhouse in Marylebone and get excited about Whittards. In other words, they’re Posh West London Chos.  These were made for polite dipping over politer conversation. Followed by sudden hunger and a kebab. Pleasing, but not satisfying. The more I look at them, the more I want to sort of shove my face in the perfectly formed posho plate and cover myself in relish. Screaming and chomping, like an animal. Chos are made to messy. However, this is just my opinion.

Ultimate London Nacho? Tom gives them 6.5/10 (I failed to inform him it’s out of 5) so will convert this to a solid 3/5. Posh and homemade, yes, but isn’t mess and chaos the point of the Nacho?

Thinking about nachos? So am I.